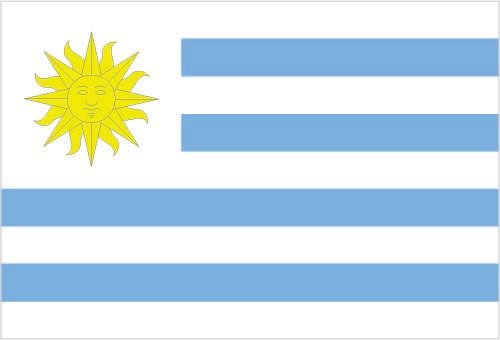 Montevideo, founded by the Spanish in 1726 as a military stronghold, soon took advantage of its natural harbor to become an important commercial center. Claimed by Argentina but annexed by Brazil in 1821, Uruguay declared its independence four years later and secured its freedom in 1828 after a three-year struggle. The administrations of President Jose BATLLE in the early 20th century launched widespread political, social, and economic reforms that established a statist tradition. A violent Marxist urban guerrilla movement named the Tupamaros, launched in the late 1960s, led Uruguay’s president to cede control of the government to the military in 1973. By yearend, the rebels had been crushed, but the military continued to expand its hold over the government. Civilian rule was restored in 1985. In 2004, the left-of-center Frente Amplio Coalition won national elections that effectively ended 170 years of political control previously held by the Colorado and National (Blanco) parties. Uruguay’s political and labor conditions are among the freest on the continent.

seasonally high winds (the pampero is a chilly and occasional violent wind that blows north from the Argentine pampas), droughts, floods; because of the absence of mountains, which act as weather barriers, all locations are particularly vulnerable to rapid changes from weather fronts

second-smallest South American country (after Suriname); most of the low-lying landscape (three-quarters of the country) is grassland, ideal for cattle and sheep raising

Uruguay rates high for most development indicators and is known for its secularism, liberal social laws, and well-developed social security, health, and educational systems. It is one of the few countries in Latin America and the Caribbean where the entire population has access to clean water. Uruguay’s provision of free primary through university education has contributed to the country’s high levels of literacy and educational attainment. However, the emigration of human capital has diminished the state’s return on its investment in education. Remittances from the roughly 18% of Uruguayans abroad amount to less than 1 percent of national GDP. The emigration of young adults and a low birth rate are causing Uruguay’s population to age rapidly.

In the 1960s, Uruguayans for the first time emigrated en masse – primarily to Argentina and Brazil – because of economic decline and the onset of more than a decade of military dictatorship. Economic crises in the early 1980s and 2002 also triggered waves of emigration, but since 2002 more than 70% of Uruguayan emigrants have selected the US and Spain as destinations because of better job prospects. Uruguay had a tiny population upon its independence in 1828 and welcomed thousands of predominantly Italian and Spanish immigrants, but the country has not experienced large influxes of new arrivals since the aftermath of World War II. More recent immigrants include Peruvians and Arabs.

Children under the age of 5 years underweight

definition: age 15 and over can read and write

etymology: name derives from the Spanish pronunciation of the Guarani Indian designation of the Uruguay River, which makes up the western border of the country and whose name later came to be applied to the entire country

etymology: the name “Montevidi” was originally applied to the hill that overlooked the bay upon which the city of Montevideo was founded; the earliest meaning may have been “[the place where we] saw the hill”

amendments: initiated by public petition of at least 10% of qualified voters, proposed by agreement of at least two fifths of the General Assembly membership, or by existing “constitutional laws” sanctioned by at least two thirds of the membership in both houses of the Assembly; proposals can also be submitted by senators, representatives, or by the executive power and require the formation of and approval in a national constituent convention; final passage by either method requires approval by absolute majority of votes cast in a referendum; amended many times, last in 2004

civil law system based on the Spanish civil code

citizenship by descent only: yes

18 years of age; universal and compulsory

cabinet: Council of Ministers appointed by the president with approval of the General Assembly

elections/appointments: president and vice president directly elected on the same ballot by absolute majority vote in 2 rounds if needed for a 5-year term (eligible for nonconsecutive terms); election last held on 27 October 2019 with a runoff election on 24 November 2019 (next to be held in October 2024, and a runoff if needed in November 2024)
election results: Luis Alberto LACALLE POU elected president -** results of the first round of presidential elections:** percent of vote – Daniel MARTINEZ (FA) 40.7%, Luis Alberto LACALLE POU (Blanco) 29.7%, Ernesto TALVI (Colorado Party) 12.8%, and Guido MANINI RIOS (Open Cabildo) 11.3%, other 5.5%;** results of the second round:** percent of vote – Luis Alberto LACALLE POU (Blanco) 50.6%, Daniel MARTINEZ (FA) 49.4%

judge selection and term of office: judges nominated by the president and appointed in joint conference of the General Assembly; judges serve 10-year terms, with reelection possible after a lapse of 5 years following the previous term

Diplomatic representation in the US

Diplomatic representation from the US

nine equal horizontal stripes of white (top and bottom) alternating with blue; a white square in the upper hoist-side corner with a yellow sun bearing a human face (delineated in black) known as the Sun of May with 16 rays that alternate between triangular and wavy; the stripes represent the nine original departments of Uruguay; the sun symbol evokes the legend of the sun breaking through the clouds on 25 May 1810 as independence was first declared from Spain (Uruguay subsequently won its independence from Brazil); the sun features are said to represent those of Inti, the Inca god of the sun

note: the banner was inspired by the national colors of Argentina and by the design of the US flag

Uruguay has a free market economy characterized by an export-oriented agricultural sector, a well-educated workforce, and high levels of social spending. Uruguay has sought to expand trade within the Common Market of the South (Mercosur) and with non-Mercosur members, and President VAZQUEZ has maintained his predecessor’s mix of pro-market policies and a strong social safety net.
Following financial difficulties in the late 1990s and early 2000s, Uruguay’s economic growth averaged 8% annually during the 2004-08 period. The 2008-09 global financial crisis put a brake on Uruguay’s vigorous growth, which decelerated to 2.6% in 2009. Nevertheless, the country avoided a recession and kept growth rates positive, mainly through higher public expenditure and investment; GDP growth reached 8.9% in 2010 but slowed markedly in the 2012-16 period as a result of a renewed slowdown in the global economy and in Uruguay’s main trade partners and Mercosur counterparts, Argentina and Brazil. Reforms in those countries should give Uruguay an economic boost. Growth picked up in 2017.

GDP – composition, by end use

GDP – composition, by sector of origin

Taxes and other revenues

note: data cover general government debt and include debt instruments issued (or owned) by government entities other than the treasury; the data include treasury debt held by foreign entities; the data include debt issued by subnational entities, as well as intragovernmental debt; intragovernmental debt consists of treasury borrowings from surpluses in the social funds, such as for retirement, medical care, and unemployment; debt instruments for the social funds are not sold at public auctions.

Reserves of foreign exchange and gold

Electricity – from other renewable sources

note: the COVID-19 outbreak is negatively impacting telecommunications production and supply chains globally; consumer spending on telecom devices and services has also slowed due to the pandemic’s effect on economies worldwide; overall progress towards improvements in all facets of the telecom industry – mobile, fixed-line, broadband, submarine cable and satellite – has moderated

the Armed Forces of Uruguay inventory includes a wide variety of older or second-hand equipment imported from a range of suppliers, including Brazil, Chile, Ecuador, France, Germany, Italy, Portugal, Russia, Spain, and the US (2019 est.)

in 2010, the ICJ ruled in favor of Uruguay’s operation of two paper mills on the Uruguay River, which forms the border with Argentina; the two countries formed a joint pollution monitoring regime; uncontested boundary dispute between Brazil and Uruguay over Braziliera/Brasiliera Island in the Quarai/Cuareim River leaves the tripoint with Argentina in question; smuggling of firearms and narcotics continues to be an issue along the Uruguay-Brazil border

Sun Sep 26 , 2021
Introduction :: Vietnam Background The conquest of Vietnam by France began in 1858 and was completed by 1884. It became part of French Indochina in 1887. Vietnam declared independence after World War II, but France continued to rule until its 1954 defeat by communist forces under Ho Chi MINH. Under […]